Guardian freelancers are standing together for minimum standards, and we need you to stand with us.

Hundreds of media workers, readers and subscribers have joined the campaign and got Guardian management to the table, but we have a long way to go before they commit to real change and an agreement for freelancers.

By standing with freelancers for real voice and minimum standards, you’re fighting for a better media industry, where marginalised and diverse voices are heard and stories are told ethically. 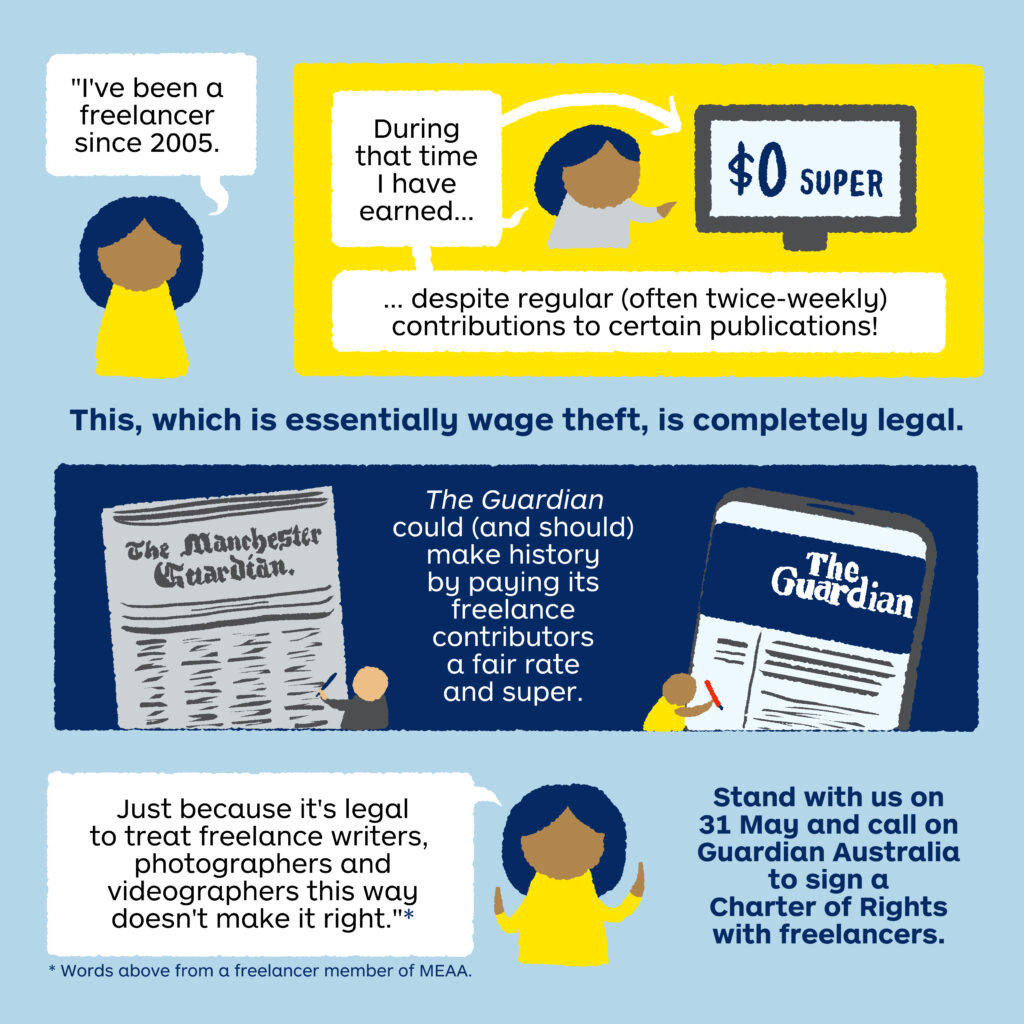 Read The Statement from Guardian Freelancers

Precarity is rampant within the Australian media industry.

By relying on the labour of freelancers, major outlets create a layer of underpaid, overworked employees living from paycheck to paycheck, and erode wages and conditions for permanent staff.

In that context, MEAA members who contribute as freelancers to Guardian Australia began meeting in June 2021. This group has since grown to over 100 members.

An individualised system of precarious labour will inevitably result in adverse outcomes for the most vulnerable and isolated workers.

That’s why freelancers need a formal, collective bargaining process, culminating in a signed agreement with the union thereafter applying to all workers. We should not be dependent on personal relationships with individual editors.

On that basis, in September 2021, we published an open letter signed by nearly a hundred MEAA members who contribute to the Guardian. Alongside 180 other supporters, we called for management to codify minimum rates and conditions for freelancers in a formal agreement with the MEAA.

The Guardian declined to even meet with our representatives.

After that rebuff, we again contacted Guardian management. In our second letter, we stressed that we sought ‘only the opportunity that our in-house colleagues have: to discuss and agree on the conditions of engagement in which a fair and respectful relationship can occur’.

Once more, management refused to meet.

We are proud to contribute to a progressive publication. We believe our work has helped the Guardian to establish its strong presence in Australia.

But we want it to exemplify the values it claims to uphold.

As we said in our second letter, ‘an agreement signed between the Guardian and its contributors would set an important precedent for the media’s treatment of freelancers, a category including many diverse and vulnerable writers and media practitioners’.

By agreeing to collective representation for freelancers, the Guardian would put pressure on other publications to address precarity within the industry.

Conversely, by refusing even to meet, the Guardian provides an alibi behind which the corporate media can hide.

On the 31st of May, Guardian freelancers will stage a public twitter ‘Day of Action’.

We want the writers, readers and subscribers who have welcomed the Guardian as a progressive voice to join us. Together, we can urge management to do the right thing: meet with us and sign a collective agreement for freelancers.